As a research project for my Anthropology degree, I studied a Massive Multiplayer Online Game The Lord of the Rings Online. I used participant observation and interviews to conduct this ethnographic research. I wrote my thesis on MMO and social representations, using my research as well as academic and industry studies.

Observations were conducted within the game world only and not face-to-face. I was participating as a player. Other players knew me both as a player and a researcher. This way, I achieved a greater proximity with other players and obtained a better understanding of the game and social dynamics. I took notes on every session on a research journal.

I also conducted long interviews (one hour on average). I created an interview guide which contained the main themes I was interested in and possible questions. Though I chose to conduct interviews on a conversational basis mostly, to stay open to what players were bringing to my attention. The conversation flew naturally from one theme to another, depending on the player's interests. The guide was used mainly to check that all themes had been covered. I used a voice-chat application external to the game to conduct and record the interviews, but also in-game text chat in two cases. I did the integral transcription of all the audio interviews using a specific software.

To reduce and expose the potential biases introduced by my participation, I conducted an analysis based on auto-anthropology method. I did a critical analysis of my own participation in the game, my motivations and my actions. I also examined what kind of impacts this participation had on the research itself, through the relations build with the other players.

This research includes many useful insights in players’ motivations, goals and pain points, but an 88-page thesis wasn't the best format to communicate them. So I chose to create six personas to illustrate my findings in a synthetic and concrete way.

Each persona is composite, the sum of multiple inputs. Each of them concentrates in one archetype several typical attributes I found in different players. 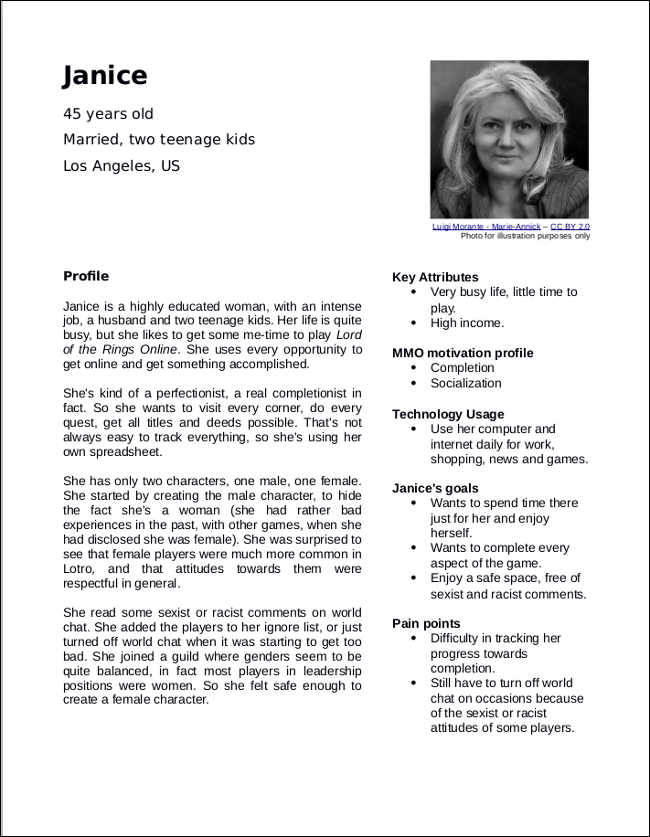 There have been a lot of discussions on what kind of information should be part of a persona or not, how to communicate personas, and how to use them.

My study was not informed by specific business goals. However, I constantly had in mind the objective to uncover design opportunities. As such, these personas would be useful very early in the design process, as part of a need-finding study. Once a specific product or service idea is validated, some of these personas would need to be reviewed and refined based on the design concept.

I chose to use a photo for each persona. A significant part of the human brain is devoted to identifying and decoding face features. This can lead people to automatically make false assumptions, but it also makes the persona easier to remember and empathize with. I hope to balance the former by giving a clear story highlighting the circumstances and motivations, so the readers can rethink their assumptions. This choice actually depends on the audience for whom I'm designing the persona for.

Lastly, I included some demographic information. I don't think demographics should be systematically included, but some pieces of demographic information can be relevant to mention, depending on the product/service and context of use. This question is part of a much larger debate on the relevance of psychological vs sociological factors to explain an individual thoughts and behavior. In short, both are relevant. Some people are often reluctant to categorizations because any kind of category seems to reduce your (their) individuality. It might be even more pronounced among designers, who by definition are creative people, who regard themselves as unique. However, sociological studies are more reliable than psychological studies (in terms of reproducibility). Plus, there are often an inter-play between sociological and psychological factors. Focusing only on one aspect will give the designers an incomplete view. Nonetheless, in the future, if I choose again to include relevant pieces of demographic information, I will draw them from sociology studies and state the reason for including them explicitly.